Launch of New Book:
The Pertinence Way – Our Partnership Story

Dr. Sunday Olorunsheyi and Mr. Wisdom Ezekiel, the Co-founders of renowned real estate firm Pertinence Group, recently wrote and published a book on how they have thrived in business partnership after successfully growing the company, currently worth billions of Naira in 10 years.

The book titled: ‘The Pertinence Way – Our Partnership Story’, was unveiled at a launch held at the company’s corporate head office in Akowonjo, Lagos, on Thursday, 15 December, 2022. 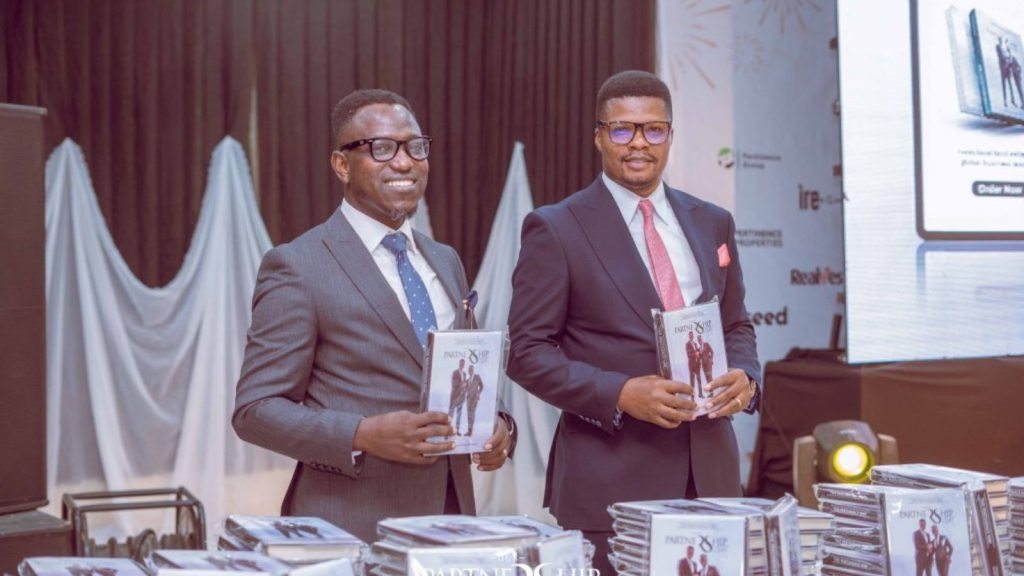 Speaking at the launch, the authors stated that the book chronicles how they went from local land sellers to global business leaders within a decade. They added that they have generously shared their lessons, pitfalls, and victories recorded within the period under review.

“It’s a Ten-Chapter Book that covers everything you need to know about Pertinence, as well as the backbone of the business which is our business partnership,” said Olorunsheyi.

He added that, “The book is about how we went from local land sellers in 2012 to becoming directors of a group of companies, with subsidiaries blazing the trail in various sectors of the Nigerian economy such as: real estate, finance, automobile and technology.

An interesting thing about the book is that we didn’t just write principles, we told stories of how we scaled through. You will also not just read about the success stories, but also about the failures and lessons we learnt especially when we began diversification of our business operations.

“There might have been certain things you saw us do and thought of as successes, but in this book, you’d be surprised to find us recording them as failures.

Dr. Olorunsheyi explained that since meeting with Mr. Ezekiel, they have shared similar personal values and a credible vision to establish a good legacy in the coming years. He noted that the aim of the company was to reach the centenary status in partnership and business, as there are not many partnerships with such a history in Nigeria.

He put the actual cover price of the legacy book at over the N50,000 at which it has been offered, considering the volume and value of information therein for readers.

On his part, Ezekiel said they decided to write the book about their entrepreneurial journey because documentation was necessary for processes to be replicated. Using a global burger-producing brand as a case study on the need to document business processes, he alluded to the consistency in the quality of the burgers, no matter where one patronised them globally. He said the processes are documented and hence could be flawlessly replicated the world over.

We realised that there are so many people who have succeeded in business as partners even in this country, but they have not documented their journeys for younger people to read and learn from. One of the reasons why we embarked on writing this book is to fill this gap,” said Ezekiel.

Focusing on what was ahead in the Pertinence business, Ezekiel told guests at launch that in the next 10 years, the company will undertake mega projects. He said a major goal was to build over one million houses into African space.

Mr. Olusegun Ajayi, a UK-based friend of the organisation, who was a guest at the book launch said he was stunned by the success of the business partnership between the co-founders, especially considering their ethnic differences.

In his words, “In this world that we are living in, especially in Nigeria, it is not easy to see an Igbo man and a Yoruba man working together and being successful. I have known and watched them for over eight years already. I’m sure they may have had times of disagreements behind closed doors, but it has never shown outside.”

Another guest who’s also a realtor, Ms. Oluwakemi Adegoke, said she had always believed that partnerships could never work in this part of the world, but has since changed her mindset after years of working with the co-founders of Pertinence.

She said, “From what I have heard from the co-founders today, I believe that business partnerships can really work. I have bought a copy of the book. I am expecting to learn more about how partnerships work, and what they have done together to have come this far. I believe that by the time I’m done reading the book, I would have seen all the secrets and all the methods they adopted to build this great organisation.”

BACK TO BLOG PAGE